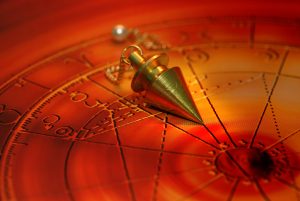 One of the oldest methods of divination is pendulum divination.  This is how many people can still get answers from the spirit world.  People used to swing their pendulum to figure out what the gender of a baby is to finding information about gems.

Make sure that you cleanse your pendulum with sea salt and water for three days before you use it.

There are other cleansing methods and if the pendulum is metal, the salt can corrode it.  Some crystals react differently to the salat water so using a different method might be better.  Here are a few methods:

Next, you need to decide what the direction of yes and no is for your pendulum.  Not all pendulums are the same.  Let the pendulum say which way is yes and which way is no.  Ask it.

If the pendulum circles clockwise for yes or no, know which way.

Some pendulums do not go in a circle but go back and forth.

Ask questions with yes and no answers to see what way the pendulum moves.  Ask more than once.

A pendulum can be made out of anything, sometimes, people use things that are sentimental to them such as a ring or a gem.  Some of the objects can include things like crystals, Knick knacks, rings and more.

What Kind of Chain?

Many people choose a chain such as a silver chain while others choose a cord to use.

Once you get your pendulum, make sure you respect it.  Never ask the same question more than once, just accept what answer it gives you and move on.  Don’t depend on the response to make important decisions and only use it if you have good thoughts behind it.  The pendulum is your and should only be used by you and no one else.

There are different ways to hold a pendulum and you need to figure out which way is best for you.

You can use your dominate hand to hold the pendulum or you can thread a chain around it and use your finger to drape it over your other fingers.  You can also use your thumb or index finger to let it swing.

Working with Your Pendulum

Make sure you are sitting comfortable at a table and hold the pendulum from the chain or cord to make it work.

You can use the pendulum with other things like maps, numbers, alphabet or calendars to help you get your answers.

The history of the pendulum is not known.  People have been seeking spirits for many years and the pendulum is one of the most known ways of finding answers.  The pendulum has been used to diagnose disease, to find gem deposits, to get yes and no answers and to find missing people using a map.

One person, Abbe Mermet was a priest and used the pendulum in the early 1900’s to locate minerals and missing people by using maps.  Then Pope John XXII was banned of using his pendulum in the 1320’s because people said this was the devils work.

Other people used their pendulum to predict war time moves, to find water and to find tunnels and minds.

Some people use their wedding rings to ask about the sex of their unborn babies while farmers might use one for knowledge of where to plant corps.  The Chinese even use it to find where evil spirts are hiding.

You can use the pendulum to get information into your daily life.  Practice using it but always respect it. 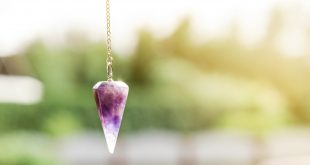 If you are starting to do readings and you want to find the perfect pendulum, …